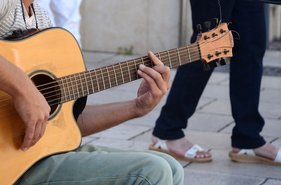 Almost every instrument has a resonator. Any container of air that amplifies part of the vibrations counts.  The voice has the most unique resonator because it can actively change shape.

The air inside the body of the guitar acts as a resonator for the vibrating strings. Once the guitar is built, the resonator's shape is fixed,  unlike the vocal tract.

how we adjust the vocal tract

For each part of the vocal tract we'll talk about ~

The vocal tract is made up of lots of pockets of air
If we think of the vocal tract as a column of air, we actually learn that it is hundreds of air columns stacked on top of one another, each of them with their own individual pitch. That’s how complex our instrument is.  Here are some ways people brake it down--
Several of the smaller pockets of air in the vocal tract, one of them directly above the vocal folds,  account for the upper formants, F3, F4, F5 ( commonly labeled the “Singer’s Formant”). These can bring out the ‘ring’ or ‘twang’ in someone’s sound (See Ring/Ping/Twang page for more info)
Density of walls  also affects the sound
The density of the walls of a resonator also determine the frequencies that are brought out of the sound. If the walls are soft, the energy will be spread out over many frequencies. If the walls are harder, more energy will be given to a few frequencies. (The official concept is called Formant bandwidth). When the muscles around the vocal tract are flexed, there are harder walls on the resonator. This is partly why more ‘lift’ or tonus in the face can bring some clarity to the sound and relaxing muscles in the tongue and pharyngeal wall can bring warmth or richness to the sound.
It's wet and squishy in there
We have a unique resonator compared to other instruments for a lot of reasons – one being that ours is wet and spongy inside. This can also affect the pitch of the air inside the vocal tract.
EVERYTHING feeds back to the vocal folds
If the vocal tract is creating a shape so that the pitch of the air boosts the pitch being sung, the vocal folds can work much more efficiently. The vocal tract can boost the sound or fight the sound, both drastically effect the vibrations that the vocal folds are able to create. The vocal tract can also try to overcompensate for the vocal folds by using muscles of the neck and pharynx to try to squeeze the vocal folds together if they’re not coming together enough. It is important to coordinate the tiny muscles inside the larynx to do this job instead to avoid fatigue and tension (See Inside the Larynx)
Tiny physical adjustments make huge acoustical differences
Millimeter movement of the tongue, slight spread of the lips and a whole new sound is created with a different acoustic signature. It makes the coordination process a very fine-tune learning experience – but, it also means we have so many options for the sounds we want to make! – with  just the tiniest of adjustments  :)
Want to learn more?
There's lots more to learn!