What part of our body does the resonating?

requirements for a resonator

A resonator must
-Have an opening
-Have empty space
Vocal Tract: Check and Check!

Is the chest  cavity a resonator?
No, it does not  have an opening for sound waves to escape.
Bones may vibrate  in the chest and give the speaker/singer a sensation, but this is not adding to the overall sound.

What about 'head resonance' then?
Vibrations may be felt throughout the head, but the only  resonating area (that contributes to the sound) is the vocal tract .

Sinuses?
No opening, no resonator. All sensations felt in this region do not actually contribute to the sound. They are just indicators that the  resonance is strong from the vocal tract.
This pitch range is determined by the
​size
shape
density of walls
and  size of opening
of the container it's in

a thing to know about sound

When 2 sound waves are similar they boost each other.

Boost meaning -  the sound wave becomes bigger  (more air is displaced) and is perceived as louder.

One wave re-sounds the other - hence the term *re.son.ate*

Another way to say it:  When a formant  is  close to a harmonic, the harmonic is boosted.

what happens when they combine? 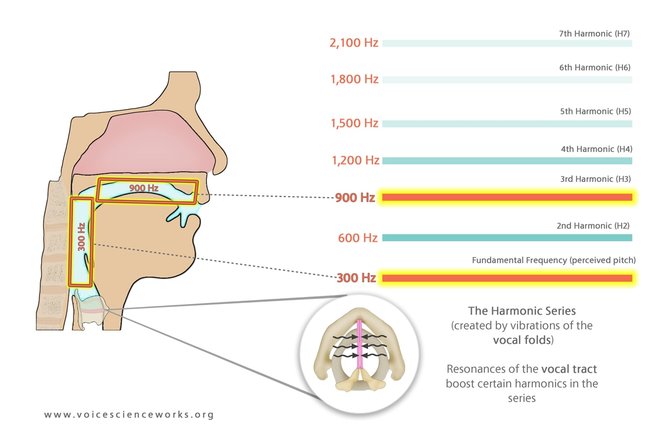 This is an example of the  harmonics from the  vocal folds  lining up with the formants in the vocal tract. Resonance is being achieved.

300 Hz is the fundamental frequency - this is the pitch we would perceive as the note being sung, about a  D4.

What would this sound like?
The pitch being sung is  about a D4.  The vocal tract is in a shape  to create a speech like /u/ vowel.    Because the  lowest harmonic (the fundamental) is getting a strong boost it is going to have  a pretty 'whoopy' timbre (See Acoustic Strategies page).  The lined up resonance is going to make this vowel/pitch combination sound easy, sustainable,  and have 'volume for free'.

What would this feel like to the singer?
The  singer would probably describe some sort of buzzing sensation in their head  as a result of the resonance.  It would probably feel easy to sing and the sound would feel strong. 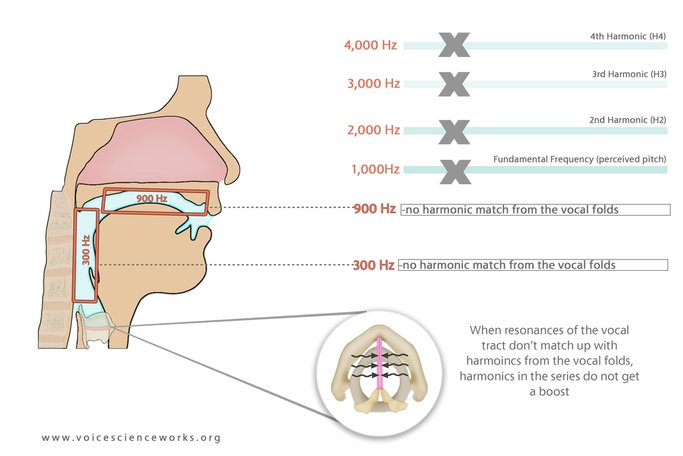 What happens when they don't line up?
This is an example of a lack of resonance.  The harmonics from the vocal folds are  not being boosted by the vocal tract

We are now sending a different fundamental pitch and subsequent harmonics through that shape. The pitch is close to a C6 (~1,000 Hz the fundamental frequency).  None of the  harmonics line up with  the formants from the vocal tract, they are all too high.  None of them are going to get a boost.

What would this sound like?
The pitch is close to a C6 and the vocal tract shape is for /u/. Listeners might describe it as sounding tight, small, squeak-like, unsustainable.

What would it feel like to the singer?
Anyone who has tried to  sing a speech level /u/ on a high C  would give you a fairly strong answer - that just doesn't work. It feels tiny, pinched and like at any moment it might quit. The second the vocal tract opens up and the pitch of the air rises to match one of the harmonics (like in an /ae/ shape)  it will all of a sudden feel booming loud, piercing  and strong.

did we answer the question yet?

Resonance is when a harmonic from the vocal folds lines up with the pitch of the air (formant) in the vocal tract.  The harmonic is boosted and  gains volume.  It is re -sounded, or resonated.

Other ways to say it:
More bang for your buck
Volume for free
The vocal tract is 'lined up'
The right vowel  for the right pitch
The tone is supported  (many might argue  support only comes from the power source, but creating a boost in resonance will absolutely support the tone)